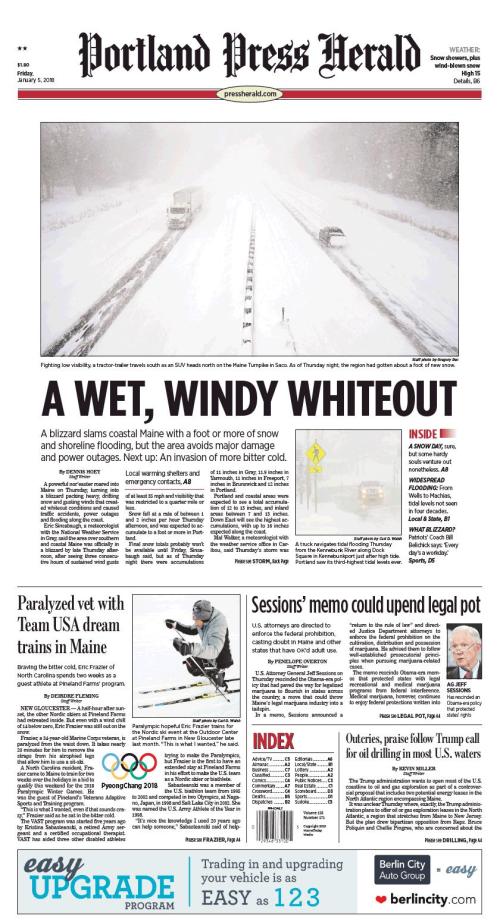 A powerful nor’easter roared into Maine on Thursday, turning into a blizzard packing heavy, drifting snow and gusting winds that created whiteout conditions and caused traffic accidents, power outages and flooding along the coast.

Eric Sinsabaugh, a meteorologist with the National Weather Service in Gray, said the area over southern and coastal Maine was officially in a blizzard by late Thursday afternoon, after seeing three consecutive hours of sustained wind gusts of at least 35 mph and visibility that was restricted to a quarter mile or less.

SHOW US YOUR SHOTS

Do you have photos from Thursday’s storm that you want to share? Send your best to online@pressherald.com and we’ll include them in a photo gallery to be published Friday. Include your name, the place and time of day when you took the photo, and any other relevant information for a caption.

Snow fell at a rate of between 1 and 2 inches per hour Thursday afternoon, and was expected to accumulate to a foot or more in Portland.

Final snow totals probably won’t be available until Friday, Sinsabaugh said, but as of Thursday night there were accumulations of 11 inches in Gray, 11.9 inches in Yarmouth, 11 inches in Freeport, 7 inches in Brunswick and 12 inches in Portland.

Portland and coastal areas were expected to see a total accumulation of 12 to 13 inches, and inland areas between 7 and 13 inches. Down East will see the highest accumulations, with up to 16 inches expected along the coast.

Mal Walker, a meteorologist with the weather service office in Caribou, said Thursday’s storm was one of the most powerful to hit the East Coast in recent memory.

Read the rest of this story in the Portland Press Herald.

This entry was posted in Environment, Maine, Maine outdoors. Bookmark the permalink.