The latest record-setting number isn’t much of a surprise, as on Jan. 9, park officials announced an estimated 3,497,187 visitors had visited Acadia as of the end of November. That’s 560,601 more than came into Acadia for 11 months of 2016 and broke the park’s record 3.3 million visitations that year.

An estimated 12,684 people visited Acadia in December, about 14.4 percent less than came to the park in December 2016, when 14,611 visited, according to statistics provided by park spokesman John Kelly.

Read the rest of the story.

Watch Your Step: A Hike on the Precipice Trail in Acadia National Park | Trailmix, the L.L. Bean blog

L.L. Bean and Acadia National Park are truly Maine fixtures. And I’m becoming a fan of the L.L. Bean blog.

Our Employee Outing Club takes dozens of trips every year – everything from skiing and snowshoeing in the winter to hiking, paddling and camping in the summer. A recent trip took a group of L.L.Bean employees up the Precipice Trail in Acadia National Park, where a steep and rocky hike led them to picturesque views of Down East Maine. The Precipice Trail is the most challenging hike in the park and only recommended for experienced hikers who aren’t afraid of heights! These L.L.Bean employees were ready for the challenge.

Read more of this entry in the L.L. Bean blog and see some great photos of Acadia National Park.

Posted in Education and Schools, Environment, Health and Welfare, Outdoors

Maine stuff in my California apartment No. 10 – hearing ‘Acadia’

Scan of a CD by Jim Chappell inspired by Maine's Acadia National Park.

Today’s photos – scans really – are of a CD cover and a couple of pages from the accompanying booklet. It is an instrumental CD by Jim Chappell that came out in 1996, I believe, and was inspired by Acadia National Park.

The CD, of course, is called “Acadia.”

My mother gave me the CD as a gift many years ago. I don’t recall if it was a birthday gift or a Christmas gift or just a gift from out the blue. Moms do that from time to time, give gifts for no reason at all.

The music is very soothing, relaxing and comfortable to listen to – piano, violins, cello, French horn, flute, that sort of thing. It’s not Radiohead or The White Stripes, but not everything has to be.

The CD had been lost among other CDs on a bookshelf that I recently went through. I’m listening to the CD at the very moment that I am writing this entry and I’ll very probably hit replay once it plays through.

Part of the booklet reads:

“The quiet solitude of the deep woods … the rumbling roar of surf crashing on the rocky coast of Maine … the silent sweep of a falcon high above a shimmering lake and the whelping sound of seals on tiny inlets. This is Acadia National Park. It is a meeting of mountain and valley, forest and meadow, ocean and land in a symphonic splash of salt, spray and foam. It is sunrise from the glacier-flattened top of Cadillac Mountain, bathing the sea and nearby cliffs with a caress of soft pink and gold as lighthouses flash like fireflies from the surrounding headlands.”

Scan of one of the pages from a booklet that came with the CD by Jim Chappell.

It’s been a very long time since I’ve been to Acadia National Park, but that passage hits it pretty well on the head. I don’t recall the part of “lighthouses flash like fireflies,” but it was a pretty long time ago. It is Maine, after all, with lighthouses on nearly every other coastal bluff.

The CD carries song titles that will be familiar to those who have visited Acadia National Park: “Cadillac Mountain,” “The Carriage Road,” “Southwest Harbor,” “Long Pond Canoe,” “The Loop Road,” and “Jordan Pond,” among others. 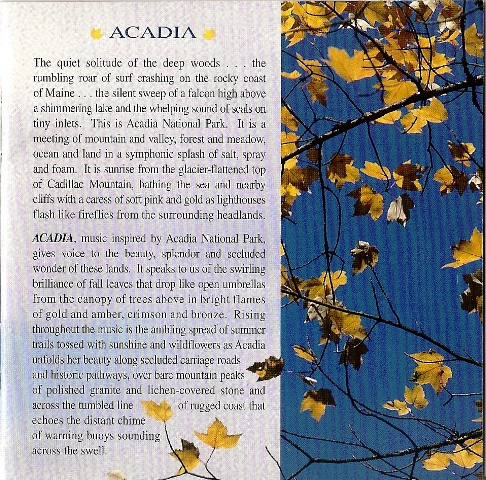 Scan of another page from a booklet that came with the CD "Acadia" by Jim Chappell. The CD was inspired by Acadia National Park.

For total disclosure, I am again stretching the whole Maine-stuff-in-my-California-apartment thing with this entry. The album was inspired by Acadia National Park as Chappell spent a week hiking around Acadia and humming into a cassette recorder – remember, this was in 1996 and it was a little early for digital recorders – the melodies that became “Acadia.” But the booklet indicates the music was recorded in California – Sebastopol and San Anselmo. Let’s just agree that it is Maine-inspired stuff in my California apartment.

I tracked down what seems to be Jim Chappell’s official website, where you can find more information about the guy and order his music. Apparently, he’s still at it and his latest CD is being released later this month.

Posted in Maine, Politics and government

Obama family in Maine for vacation

Full coverage of Obama’s visit can be followed at obama.bangordailynews.com

You can follow live updates of the Obama’s visit on Twitter. Contribute your photos to the pool and have them ReTweeted by the Bangor Daily News by tagging your Tweets with #ObamaMDI

For more information on trail closures, visitors may call 288-3338 or go to www.nps.gov/acad.

Posted in Law and Order, Maine, Politics and government

Posted in Law and Order, Maine, Outdoors, Politics and government

FORT KENT, Maine — There is little chance the forests and wild lands of northern Maine can ever be returned to their pristine state, but a group of conservationists sees no reason they can’t be at least partially restored and protected for generations to come.

RESTORE: The North Woods has advocated the formation of a multimillion-acre park or preserve in north central Maine since 1994, and on Friday the group’s director discussed the plan with students, faculty and guests at the University of Maine at Fort Kent.

“I can’t see another place in the United States where we could even be having this discussion,” said Jym St. Pierre, RESTORE director. “We are talking about 3 million-plus acres that could be acquired without disrupting people or communities.”

The area in question has long been the center of timber and logging operations in Maine going back to the early to mid-1800s when lumber from the great northern forest produced enough raw material to help Bangor become the lumber capital of the world.

Toward the middle and end of that century, the recreational value of the vast tracts of forests began to attract the likes of Henry David Thoreau and later Theodore Roosevelt, with the railroads billing it “America’s wilderness playground.”

Click in the link for the rest of today’s story by Julia Bayly in the Bangor Daily News.