[I missed this story earlier in the week. Every kid I grew up with and I used to climb this trail every year or so. It won’t bring the young man back to his family, but they now have a place to honor his life and his duty to this country. – KM]

AUGUSTA, Maine — On Friday, Gov. Paul LePage will help dedicate a summit trail on Haystack Mountain in Castle Hill in honor of a Presque Isle native who was killed in Iraq five years ago.

The Dustin J. Libby Trail will be dedicated at 8:30 a.m. in memory of Marine Cpl. Libby of Castle Hill, who was 22 when he was killed in action on Dec. 6, 2006, while conducting combat operations in Anbar province, Iraq. He was assigned as a squad leader to 2nd Battalion, 4th Marine Regiment, 1st Marine Division, based at Camp Pendleton, Calif.

Libby was serving his second tour of duty in Iraq at the time of his death. He had served in the country previously in 2004. Between his two Iraq tours, he was stationed in Okinawa, Japan.

The trail was renamed through legislation sponsored by state Rep. Alexander Willette, R-Mapleton, and passed by the Legislature last March.

Click for the rest of the story in the Bangor Daily News.

Fall in the North Woods of Maine turns the landscape into a colorful mosaic. Photo by Kelly McInnis

Thousands flock to New England this time of year to catch the changing colors at its peak. In the North Woods of Maine, the peak has already come.

Fortunately for me, a high school classmate, Kelly McInnis, shares her photography with her Facebook friends and then I often share them on “Letters From Away.”

I love the yellow leaves against the brilliant blue sky in the first photo. It’s wonderful.

This is Haystack Mountain in the fall. Photo by Kelly McInnis

The other three photos are a reminder of my youth. Haystack Mountain – not much of a climb, really – is located along the road from Ashland to Presque Isle. I lived in Portage, but went to middle and high school in Ashland. Presque Isle was the largest city in the area and the location of grocery stores, movie theaters, and other services, so we drove by Haystack Mountain a couple of times a month. And we usually climbed to the top every other year or so.

A high school teacher, Lynwood McHatten, told his students of a time when he was a teen and boys would go to the top of Haystack to set old tires on fire to give the impression that the long-dormant volcano was coming alive. It was good for a laugh.

Here's another view of Haystack Mountain along the road between Ashland and Presque Isle. Photo by Kelly McInnis 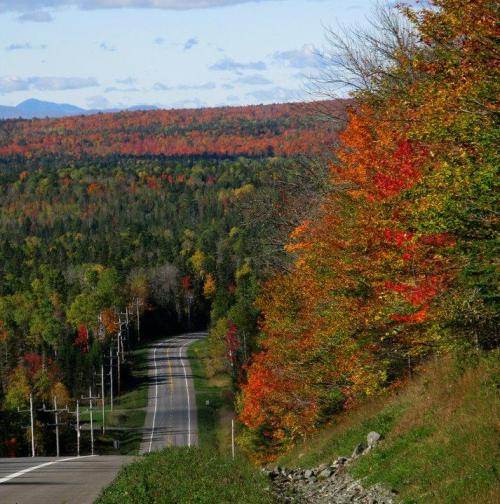 This is the view heading toward Ashland from Haystack Mountain. Haystack is a great place from which to view the fall colors. Photo by Kelly McInnis