Posted in Economy, Education and Schools, Food and Drink, Maine, News and Newspapers

NEW SWEDEN, Maine —There is no doubt that the Swedish culture is still alive in Maine’s Swedish Colony in Aroostook County.

Signs in the colony are written in both English and Swedish, many families still fly the Swedish flag in their yards, and children learn Swedish songs and dances every spring for the annual MidSommar celebration.

When the colony was established in northern Maine in the 1870s, the Swedish language was predominant. But as families saw the need for their children to become more Americanized, English became the language of choice in most households. Over the years, the language began to die off, and only about 30 residents in the colony still speak Swedish today.

Several years ago, Brenda Nasberg Jepson, a Madawaska Lake resident and filmmaker who owns Crown of Maine Productions, decided that she had to do something to preserve what was left of the language before it was lost forever.

Click for the rest of the story by Jen Lynds in the Bangor Daily News.

The DVD can be purchased at www.crownofmaineproductions.com and soon will be available in stores throughout The County.

Camping in Maine in the shadow of Mount Katahdin

Every so often I am reminded that I know some pretty talented people and some of them I’ve known a very long time.

Kelly McInnis was a high school classmate of mine at Ashland Community High School, MSAD No. 32. It was a consolidated high school with students coming from several different area communities. Portage Lake, where I grew up, was one of those communities.

Kelly, who still lives and works in The County, has a practiced eye when it comes to shooting photos. I seem to recall a photo of her from our high school yearbook, her red hair tied back and her wearing a baseball undershirt, the kind with the black three-quarter sleeves. In the photo, if I recall this correctly, she’s holding a 35-mm camera with which many of the other photos in the yearbook were shot.

But that was … holy, cow, about 30 years ago, so my memory may have faded a bit.

Anyway, Kelly shares here photos on Facebook and he graciously allows me to post them on “Letters From Away.”

Here’s Kelly McInnis’ campsite at Jo-Mary Lake Campground in the shadow of Mount Katahdin, the official end of the Appalachian Trail and the highest point in Maine. Photo by Kelly McInnis

Kelly was camping recently at Jo-Mary Lake Campground. The North Maine Woods Inc. at www.northmainewoods.org describes the amenities of the campground like this:

Sounds pretty plush for camping, but Kelly swears she roughed it by sleeping in a tent. 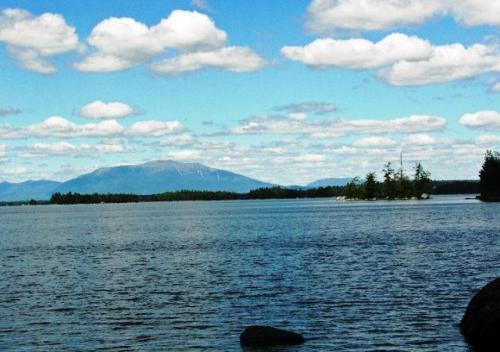 And there is Mount Katahdin, about 50 miles north of the Jo-Mary Lake Campground, according to the North Maine Woods Inc. website. Photo by Kelly McInnis

The campground is within the KI Jo-Mary Multiple Use Forest within 5 miles of the Appalachian Trial, with Baxter State Park and Mount Katahdin, the highest point in Maine, just 50 miles to the north. I don’t recall ever going to this campground, but I would now if I had a chance. It appears to be a wonderful spot.

By the way, I believe Mount Katahdin is still considered the official northern terminus of the Appalachian Trail, even though as a youth I heard Mars Hill was considered by some to be the end of the trail, as it were.

But earlier this summer I read a wire story about how a portion of the Appalachian Mountains actually may have been left behind on the European continent when the tectonic plates shifted.

Anyway, a couple of Kelly’s photos show Mount Katahdin in the background. 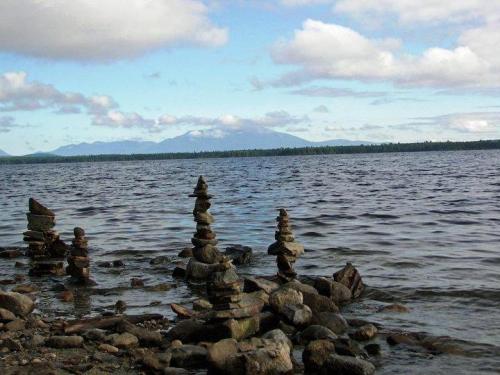 Here’s another shot of Mount Katahdin in the background and rock piles in the foreground. Kelly wasn’t sure who might have made the rock piles, perhaps bored children, she said. I think aliens from another planet may have had a hand – if they had hands, that is – in the creation of what I like to call Ancient Rock Towers of Maine’s North Woods. Photo by Kelly McInnis

Kelly didn’t know what the piled rocks were in some of the photos. Perhaps they are the product of a bored pack of children? Perhaps something more natural and mystical, such as the work of local native people? Perhaps something more mysterious still, such as the work of aliens from another planet? I think I’ll just call them the Ancient Rock Towers of Maine’s North Woods. I’m sure that will start showing up in search engines any day now. 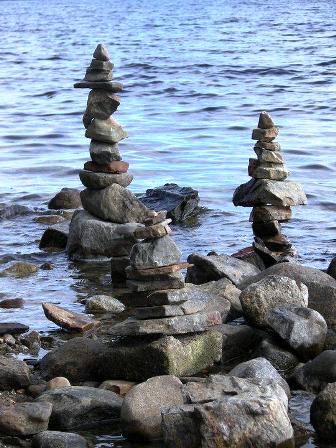 Here’s another shot of the Ancient Rock Towers of Maine’s North Woods. Photo by Kelly McInnis

Another photo appears to be shot at the edge of a stream or other water source and shows the beginning of foliage changing. It has been a rather dry summer in Maine and some of the leaves are changing sooner than they normally would, as documented by Kelly’s photos and, well, my Mom. She said the same thing when I called her Sunday. 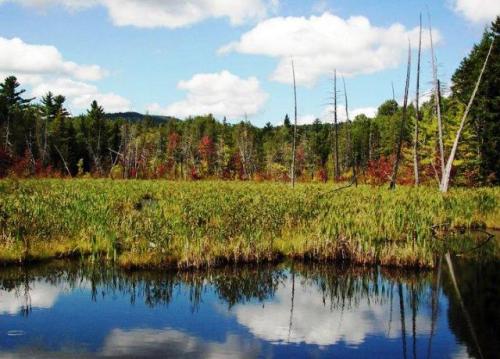 Kelly took this shot to show the beginning of the changing foliage. Maine has gone through a very dry summer and some of the leaves are changing sooner than they might have otherwise. It also shows a pretty typical opening in Maine’s North Woods – slightly boggy and surrounded by thick woods. Photo by Kelly McInnis

And there is a whimsical shot of a dedicated Maine fisherman.

Hey, buddy, whatcha usin’ for bait. Kelly’s response to that he was using the worm from the tequila bottle. Actually, the creation of the fisherman and the shooting of it with the camera both show a bit of dry Maine whimsy. Photo by Kelly McInnis

These photos were printed with Kelly’s permission.

AUGUSTA, Maine — Aroostook County has been selected to host both North American stops of the 2011 Biathlon World Cup, an event that draws Olympians and other top athletes from around the globe.

Fort Kent’s 10th Mountain Lodge had already been selected as one of the nine sites for the Biathlon World Cup, which combines cross country skiing with rifle marksmanship.

But on Tuesday, the International Biathlon Union announced that the second North American stop would be held at the Nordic Heritage Center in Presque Isle during the first week of February.

The back-to-back stops on the World Cup circuit mean that Aroostook County will have roughly 10 days in the limelight in an event that draws tens of thousands of spectators, not to mention tens of millions of television viewers in Europe.

Click on the link for the rest of Kevin Miller’s story in the Bangor Daily News.